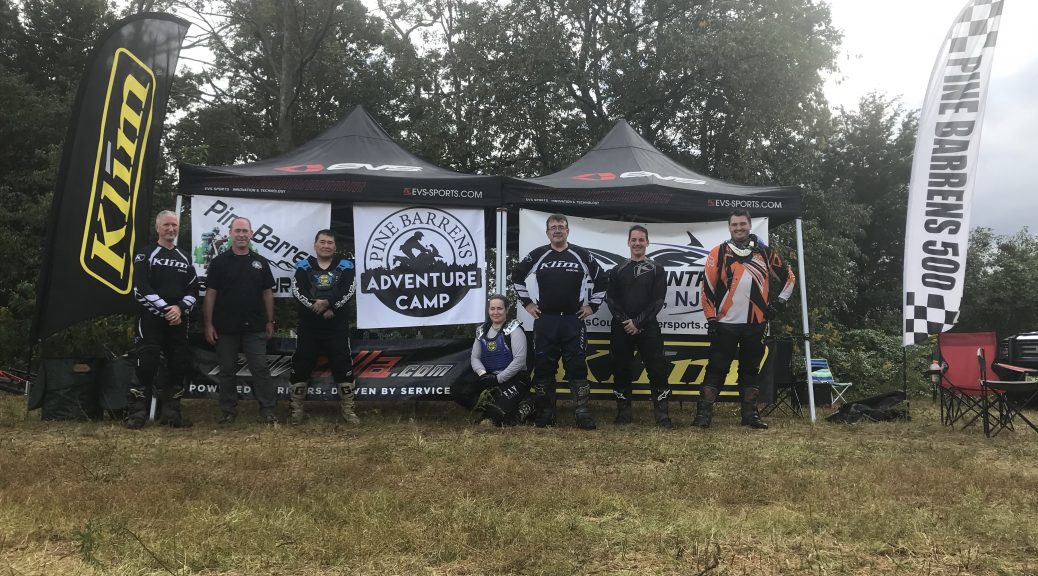 The staff and instructors of the Pine Barrens Adventure Camp are a diverse group of men and women that have one thing in common, the love of off pavement motorcycling riding. Some are champion Enduro, Motocross, or Rallymoto racers as well as experienced adventure riders. Others have an appreciation of nature and exploration and enjoy introducing riders to the world of adventure.

Jack and Mike are also officers in local enduro clubs, working to create events and preserve the rich riding and racing  history of the NJ Pinelands. We have also been organizing AMA National and Local Adventure and Dual Sport rides in the Pinelands since 2005. My first bike was a  ’72 Honda SL70 I bought new when I was about 14 years old, I rode with my friends in the local woods and gravel pits  right out of my backyard. Then a Montessa 175, followed in ’73 with a Maico 400 MX  race bike. (Maico was the leading MX motorcycle at that time) I worked at the local motorcycle shop as a mechanic and became an Open Class MX Expert a year or so later, on a Maico 440. I moved to Enduro racing  around ’76 to avoid the “Super Cross” craze that MX was evolving into.  I did well and came very close to being an “A Rider”, before an injury took me out for a while. I still enter local enduro races when I can, not competing, just to ride the course and see old friends.

I bought my first adventure bike in 1985, a Kawasaki KLR 600, after a trip to Europe, where I saw all sorts of “big dirt bikes” loaded with camping gear riding down the Autobahn, and seeing pictures in foreign magazines with Dakar stories. I couldn’t read the articles, but got the idea. Who knew this type of riding would become the fastest growing motorcycle activity twenty years later. In ’86 I got the KLR 650. Those years formed the basis for my love of exploration and wanting to enter the Dakar Rally.

The Pine Barrens 500 is the result of a practice loop I made to get in shape for the two week, 6000 mile event. Unfortunately I never had the time or money to enter the race, but had the practice loop, which was GPS guided, a novel thing at the time. I thought I could share it with like minded riders. That lead to the first Pine Barrens 300 in 2005. A few years later, I noticed a former East Coast Enduro Champion, Mike Bradway, had entered the PB500. He was interested in the GPS navigation and the event and contacted me about the GPS file. The rest is history, a year or so later we formed the Pine Barrens Adventure Camp to teach people about responsible motorcycle riding in the Pine Barrens and introduce them to adventure riding.
We are also still just big kids, getting dirty, looking for frogs, turtles and snakes in the woods. Michael is a USMCA.org Certified Instructor and Coach.

The U.S. Motorcycle Coaching Association was created to grow the sport of motorcycling through quality coaching of new and returning riders. USMCA Certified Coaches have completed the core content, agreed to uphold the USMCA values and Code of Conduct, passed a national-level background check, completed Abuse Prevention training, become certified in basic AHA or Red Cross First Aid and CPR, and taken a step towards the management of concussions and how to detect signs for heat illness and cardiac arrest. He is a member of the NJ DEP Wildlife Conservation Corps, The Nature Conservancy Citizen Scientist Program and a Rutgers Environmental Steward graduate. He has worked on numerous environmental research projects with private and government environmental agencies and has recorded numerous Threatened and Endangered Species in previously unrecorded ranges.  An award winning photographer and NRA Firearms instructor as well as a Glock Armorer and Glock competition shooter. Bill has over 30 years of riding experience and began his adventure riding experiences in 2007, riding all over the U.S. and Canada both for pleasure and crewing events like the Pine Barrens 500 and the Paris to Dacre in Ontario. As well, Bill is one of our resident experts in GPS navigation. He recently toured the Indian Himalayas on Royal Enfields as part of Mark Donham’s Ride the World tour. He is both an example of PBAC’s deep expertise and an example of how students can start Adventure Riding, apply the techniques of the school and become experts in their own right.

He entered the Army as a Private in December 1984 as served as a Tank Crewman. He was later commissioned and subsequently continued to serve in the Armor and Cavalry. He was promoted to Colonel and serves as the G3, Deputy Chief of Staff for Operations for the New Jersey Army National Guard. He has served as an instructor in the Army and brings their training methodology and instructor development doctrine to the Pine Barrens Adventure Camp. Lissa learned to ride on a ’65 Peugot Moped that was gifted to her older brother from their grandfather by herself at 8 years old. The moped didn’t survive long and after a few years without a motorcycle, she saved her babysitting money and purchased her first running motorcycle, a used ’79 Suzuki TS100, on her sixteenth birthday without permission. By ’99 she tried her first race, the Delaware Enduro Riders Hare Scramble and began competing regularly in the East Coast Enduro Association “Enduro Series” over the next 11 years. She still competes several times a year now and wishes to come back to a full race schedule again soon.
Occupation:  Service Writer/Sales/Parts/CDL Driver at Hecht Trailers Rob learned to ride as a child on his cousins Honda Z50 at 9 years old. Though he bummed rides on his friends motorcycles and eventually got an old Honda dirtbike of his own, things didn’t get super serious until his Dad helped him get his first new bike, a ’84 Kawasaki KDX200. From there, starting at his first race in ’85, the Speedsville National Enduro which he houred-out but finished, began a racing career that spans till this day! Rob is an excellent mechanic, having built & converted almost all his off-road racebikes from motocross models including his current favorite, an ’04 Kawasaki KX250 with a ’02 KX500 squeezed in it as well as swapping engines in his own daily drivers.
Occupation: On-road Forklift Technician with Eastern Lift Truck As with all of our instructors here at Pine Barrens, John is a top of the line professional. John hails from Long Island and has many years of Adventure and enduro racing experience .  As an excellent ECEA competitor John comes from a grass routes enduro club, OCCR, home of the Scrub Pine Enduro. In addition to his riding and instructional experience John has been involved with running clubs and organizations benefiting motorcyclists nationwide.